After running into the problem of User Migration as described in KB977203, we ran into another problem when trying to apply the Hotfix downloaded from Microsoft.  It seems that when going to download the Hotfix Microsoft checks your computer for locale and architecture (64-bit or 32-bit) and only displays what Microsoft believes is the appropriate patch.

Apparently when I went to download the Hotfix from our 2008 64-bit Server, it found only 1 patch that matched my architecture 64-bit and language/ locale.  I downloaded what I believed was the one and only patch and attempted to apply it getting an error saying the patch was not applicable to SCCM builds above 6005 (SP1).  My SCCM 2007 build was at 6487.

We called in a free Microsoft Update service call and I only found the mistake because I attempted to download the patch from my Linux workstation which didn't match any Microsoft architecture.  Once I saw that there was more than one patch to choose from, it was pretty easy to download the correct 429644_ENU_i386_zip.exe patch although there was still no strong indication on which of the two sp2 patches to apply.

I'm including the screenshot from my Linux machine to show the patches I saw.  I should also point out that Microsoft does allow you to view all possible downloads.  I wonder if the 429644 is mislabeled for x86 instead of x64. 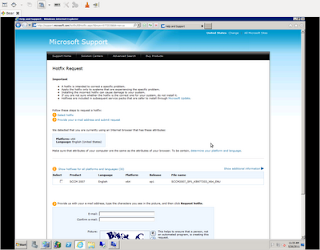 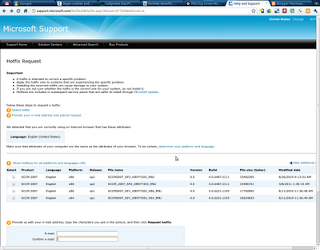