The Sitcom - The Social Lubricant needed in a time of our society changing from the Industrial Age to the Information Age.

I really like that idea. It gives me hope that the Internet will change the way that we interact with our entertainment. 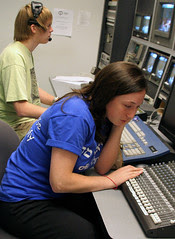 If I had to pick the critical technology for the 20th century, the bit of social lubricant without which the wheels would've come off the whole enterprise, I'd say it was the sitcom. Starting with the Second World War a whole series of things happened--rising GDP per capita, rising educational attainment, rising life expectancy and, critically, a rising number of people who were working five-day work weeks. For the first time, society forced onto an enormous number of its citizens the requirement to manage something they had never had to manage before--free time.

And what did we do with that free time? Well, mostly we spent it watching TV.

And it's only now, as we're waking up from that collective bender, that we're starting to see the cognitive surplus as an asset rather than as a crisis. We're seeing things being designed to take advantage of that surplus, to deploy it in ways more engaging than just having a TV in everybody's basement.

Email ThisBlogThis!Share to TwitterShare to FacebookShare to Pinterest
Labels: Internet